Vonnegut on the 3 basic shapes of stories

What’s the shape of your story?

I’d like to see Vonnegut draw a few of his own. I think he’d need a bigger blackboard.

Team, Red, White, and Blue on the Today Show

Team, Red, White, and Blue was featured on the Today Show! It was great to see many of my teammates from the American Odyssey relay race highlighted.

There’s a divide between civilian life and life in the military. It’s not easy for civilians to appreciate the level of commitment and honor our troops have, and, in turn, it’s not easy for injured veterans to transition to life as a civilian. Team, Red, White, and Blue tackles both of these issues.

Learn how to become an athlete, donor, and/or advocate with Team RWB.

A little hint about what I’m doing today. …

A note to graduates moving in with their parents

We’re moving in with our parent, yeah!!!

(via flickr The Chairman of the Joint Chiefs of Staff)

No, not you class of 2011, you’re so sensitive, but screw all of the folks who write about the Great Recession producing the Lost Generation, and how you all are just going to move back home and play videogames and file e-resumes while mooching off of your parents’ 401K.

Do you know what the Great Depression produced?  The Greatest Generation, that’s what.

I was reading a piece in the Huffington Post about the Lost Generation and it made me pissed off for you Class of 2011.

France 24 did a 12-minute piece on the current state of the Bangladeshi garment industry that talks about the increase of the minimum wage, recent protests, rising food prices, and the persistent tension between business and workers.

I found the interview with a mother of 6 to be the most interesting. “I want nothing for myself,” she said. “I just want to give them all [my children] an education.” That said she was not able to make it on her own wage so her daughter entered the workforce at the age of 13. At first she was denied employment because of her age, but then, as her mom quite proudly describes, her daughter put a head scarf on along with some makeup and told the factory she…

Colbert to the world: F**K off! 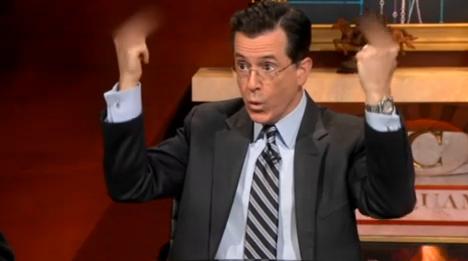 “I believe we just build a wall at the border and tell the world (whistles and flips off the world).”
– Stephen Colbert in an interview with Tea Party Express founder Amy Kremer

Jon Stewart will call out his guests and argue with them somewhat respectfully. But Stephen Colbert will totally eviscerate a guest by agreeing with their stance more than any other person in the world ever has…ever. And in doing so, Ms. Kremer’s position was left in a puddle of stupitude along with the failed presidential run of Donald Trump.

You should watch the whole interview (below), but the moment quoted above was by far my favorite and the scariest….

My son is due any day now. A man at a recent talk I gave mentioned that he saw a billboard that predicted the 2nd coming of Christ on 5/21. I joked about being the Messiah’s father and how much of a surprise that would be.

Maybe he wasn’t the one to joke around about such things with because he started to quote scripture about the second coming and how we had no idea where on earth it would happen, but somehow we’d all see it, hear it, and know it.

Again (I’m dense), I joked that regardless of where Christ lands (rises, appears), we’d all find out about it on CNN from Wolf Blitzer.

“Probably not CNN,” he said, with…

Report on Glocal Challenge #1: bin hard to avoid the news

At first I was doing great. I would get up in the morning and live stream Al Jazeera English. (No I’m not a terrorist, if you think watching AJE is something a terrorist would do, you have to read this post.) It wasn’t always easy to watch AJE. At times it was like eavesdropping on friends who are talking about what they really think of you.

AJE finished an important story on protests in Syria and turned to a discussion about president Obama releasing his birth certificate.

Clip of Obama: “We live in serious times…”

“Please tell me this…

A world of news: Info outlets from around the world

For My first Glocal Challenge, I made a point to boycott American media and force myself to go elsewhere for news. Here’s a sampler of some of the media outlets I turned to and/or were recommended to me. If you have a favorite, make a case for it in the comments below and I’ll add it to the list.

I’m one of the top 10 living underwear journalists in Indiana and I would like to review your Instant Underwear and other novelty underwear products.  Of course, I’m joking about the top 10 underwear journalist bit, but I’m not joking about writing about your underwear.  I’ve written about disposable underwear for the Travel Channel and about anti-flatulence underwear for the Huffington Post.   I also read the essays when I visit college campuses to talk about my book Where Am I Wearing? A global tour to the countries, factories, and people that make our clothes.

If you’re interested, I’d love to take a crack at your underwear.